The 12th Man Radio Show, which is dedicated to helping men talk openly about mental health, by making it part of our everyday conversation, has been renewed by Future Radio, following the show’s success.

Suicide is the biggest killer of men under 45 and Norfolk has one of the highest suicide rates in the UK. The struggles many of us faced during the pandemic brought mental health into even sharper focus, prompting Future Radio and the 12th Man campaign to come together to produce a show dedicated to getting men talking about their mental health.

The 12th Man is a bit like a football crowd – when a team is playing well and winning, the crowd is happy and creates a positive atmosphere. However, the team actually needs the 12th Man more when it’s struggling for form, and the 12th Man Radio Show helps people to support their friends, family and colleagues with their mental health.

The 12th Man campaign provides Mental Health First Aid training to trades and interest groups, giving men the knowledge and confidence to talk about mental health and to use these skills to be the 12th Man at work and in their social lives.

Since the 12th Man Radio Show first aired on Future Radio, it has broadcast almost 30 episodes and featured a range of guests talking about their own personal circumstances, what they do to improve their mental health and how they’ve contributed to the 12th Man’s aims of developing a community that is skilled and confident enough to talk. The show’s success has meant that men feel more empowered to talk openly about the pressures and challenges of life, knowing that they don’t have to face their issues alone.

“We are delighted to be able to continue our association with Future Radio. The show will help us with our aim of increasing awareness of mental health among men in Norwich and Norfolk, and we hope to inspire listeners to learn that talking is a strength”

Christopher Remer – Business Development Manager at Future Radio said: “The 12th Man Radio Show is a great asset to Future Radio. Since the launch of the show we have been very proud to be involved with the 12th Man campaign and to play a part in lowering the stigma surrounding men’s mental health. Our partnership with Nick and the campaign has gone a long way toward helping us fulfill Future Radio’s charitable objectives. Providing a resource to benefit those struggling with mental health issues is particularly important now, with increasing reports of the mental health crisis taking its toll on so many.” 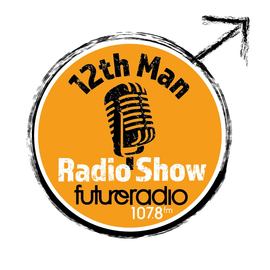